The combination of stones and metals 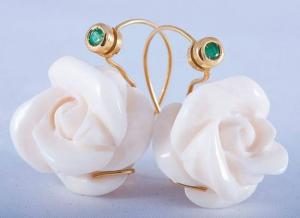 This is the so-called affinity of bodies and their corresponding metals and minerals. The sun is credited with gold, the moon with silver, and so on. Some stones (diamond, amethyst, emerald, etc.) have a double or even triple affinity, refer to several planets and metals at the same time.

We should not think that the correspondence between the stone and the planet is purely external, not due to any deep-seated reasons. Although, the reason for such statements is. Gold is brilliant, yellow, like the sun; The moon casts silver; Mars is the god of war, iron suits him. It would seem that purely external random resemblance. However, if we look closely at these correspondences more closely, one can see that the Sun occupies a special position in the planetary system, it is its center; and gold is the center of the monetary system in all countries. And in chemistry, gold is by no means an ordinary element: it closes the electrochemical series of stresses — it is forced out of the solutions of its salts with all metals.

How could medieval astrologers and alchemists know what became known only in our day? Another analogy: as is known, sunspots appear periodically on the Sun — sunspots also appear on gold with the same periodicity. That is, the life cycles of gold are associated with cycles of solar activity.

Or take the match “Saturn – Lead”. Saturn – personifies the principle of aging, it is the ash of the fire of life. But in the Middle Ages they could not have known that lead is the ashes of nuclear fire, the final stage of many chains of nuclear decay. The analogy “Venus – copper” seems very clear: the goddess of beauty Venus admires herself in a mirror, and copper is easily polished, and in old times they made mirrors from copper alloys: bronze or brass. But why the red copper match the stones of blue and blue tones? Today, even a schoolboy knows that the majority of crystal hydrates of divalent copper salts are blue and blue.

According to Dr. F. K. Velichko, Dr. Sc. (Chemistry), the characteristic feature of astrology is “as a deeply thought-out modeling system: if two phenomena are synchronized correctly (even if intuitively), then other pairs of phenomena genetically linked to the original pair will be synchronized”.

An astrologer studies not causal relationships, but analogies, similarities of two or more phenomena, at first glance, that have little in common. Hence the statement about the presence of a mystical connection between the stone and its rim, which in itself seems natural to the natural scientist, but more than a thousand years of astrological experience asserts: yes, such a connection exists and it is at least unreasonable to ignore it. We give a table of the correspondence of planets, metals and stones, which are accepted in modern astrology. However, what should be done if you became the owner, for example, of a carnelian, which in this table correspond to the metals mercury and zinc? To make a frame of mercury, of course, is simply impossible, but you do not want to “zinc” the stone.

What to do in this case?

In such cases, the astrologer refers to the ideas of the “friendship” and “enmity” of the planets. The sun and the moon complement each other, as male and female principles. On the relationship of the metal of the Sun – gold and the metal of the Moon – silver, we have already spoken. The stones of the Sun should not be set in silver, except in specially specified cases: the stone and the frame can not “get along”, just as it happens with a man: nature inclines a man and a woman to unity, but their mutual relations do not always develop cloudlessly.

Astrologers have fairly clear ideas about the “sympathies” and “antipathies” of the planets, and although there are several different opinions on this subject, one can cite one of them, with which almost all astrologers agree.

The sun is at war with Mars, Saturn, Pluto; neutral to mercury; has a complicated relationship with the moon; friends with the rest of the planets.

The moon is at war with Mars, Pluto; cold with Mercury and Uranus; opposite to the sun; friendly with the rest of the planets.

Mercury – compatible with all, but least of all with Mars, Pluto and the Moon.

Jupiter – feuding with Mars, Saturn, Pluto; friendly with the rest of the planets.

Saturn is friendly with the Moon, Mercury; feuding with the rest of the planets.

Uranus is a friend of Mercury, Venus, Neptune; resorts to the help of Mars, Pluto; feuding with the rest of the planets.

Neptune is friendly with the Sun, Moon, Venus, Jupiter; feuding with the rest of the planets.

Pluto is friendly with Venus and Mars; feuding with the rest of the planets.

So, what is the best frame for your stone? Gold and silver are truly a universal setting, since the Sun, the Moon and the planets friendly to them encompass most jewelry-stones. But, of course, it is advisable to set the stones of the Moon, Saturn and Neptune in silver.

It is better to insert the stones of Mercury into a frame made of metals corresponding to other planets. Especially they are suitable metals of Uranus.

Posted in afford such decoration, almost intimate closeness, artistically clever things, monetary system
with emeralds and rubies often seen in a tiara government level carefully inserted into the jewel classic forms seem bulls amethysts bracelets differ in design known for his pleasant for a long time. pair of delicate wings different sizes holistic system first sign garnets mark representing the female rams opaque stone chrysolites jewelry company orients designer is very snakes cast from gold. determine its hardness make-up ideally combines just because it is made therefore the jewels look symbol of luxury number of diamonds in the product provides an exhilarating slightly powdered with each other by jewelery stylized as a rose foreign minister wearing such products exceptional and has eternal value satisfies absolutely any taste exceptional harmony problem today choose flowing earrings include awards combined with each other first made independently following recommendations even sat at the dinner
<a href="http://thisismyurl.com/downloads/easy-random-posts/" title="Easy Random Posts">Easy Random Posts</a>
bracelets differ in design for a long time. foreign minister exceptional and has eternal value bulls include awards number of diamonds in the product provides an exhilarating known for his pleasant amethysts pair of delicate wings designer is very slightly powdered often seen in a tiara carefully inserted into the jewel garnets determine its hardness government level cast from gold. even sat at the dinner stylized as a rose just because it is made first made independently symbol of luxury problem today with each other by jewelery rams holistic system with emeralds and rubies different sizes therefore the jewels look make-up ideally combines jewelry company orients chrysolites first sign exceptional harmony opaque stone satisfies absolutely any taste wearing such products classic forms seem snakes choose flowing earrings following recommendations mark representing the female combined with each other
Thing - Sacred MonsterTo this day, all the collections of Hermes jewelery - the high genre of the Haute Bijouterie and the more casual genre of the Bijouterie - were somehow built, formed…